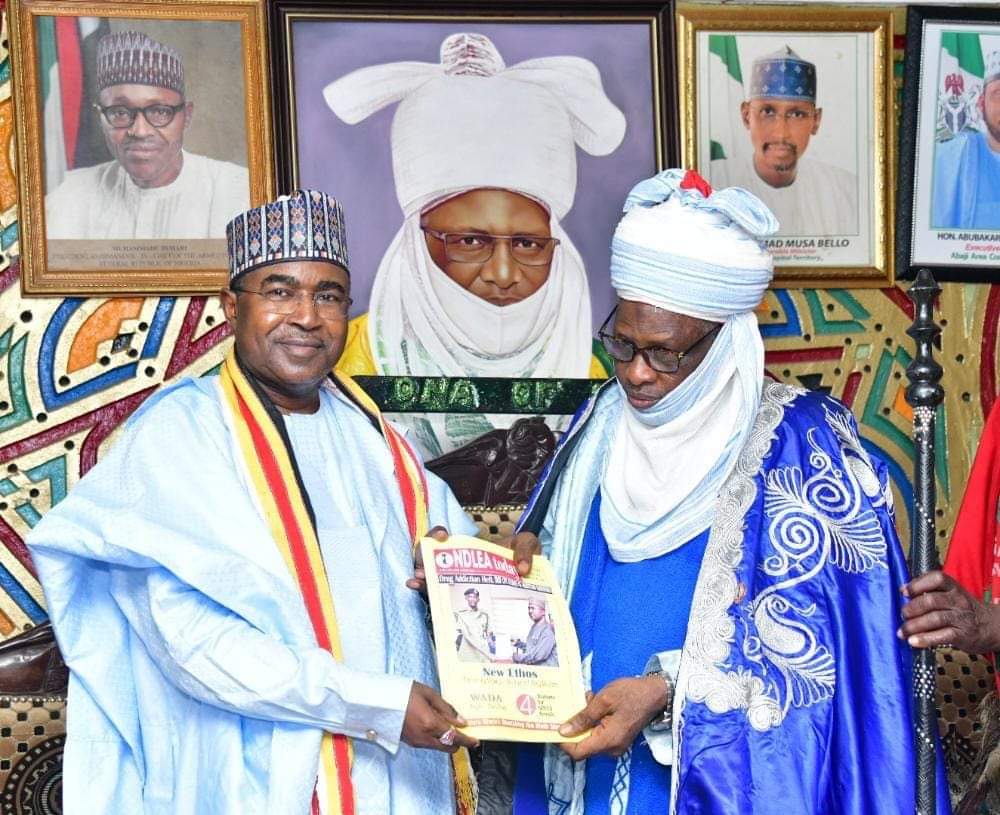 The royal father gave the directive to the Chief Imam of Abaji and his Council of Chiefs when the Chairman/Chief Executive of the National Drug Law Enforcement Agency, NDLEA, Brig. Gen. Mohamed Buba Marwa (Retd) paid him a War Against Drug Abuse, WADA, advocacy visit.

Marwa had in his remarks congratulated the monarch on his 25th anniversary on the throne and upholding the tradition and culture of his kingdom. He commended the royal father for his unflinching support for NDLEA and the fight against drug abuse and illicit drug trafficking in the country.

According to him, the traditional institution is a very important stakeholder because the traditional institution exists across every part of our society; all the way to the grassroots. It is for this reason, we would like to appeal to His Royal Highness who already has been in the forefront of tackling drug abuse to continue and intensify these efforts to set up a WADA committee in Abaji kingdom that will report directly to him and down to the small communities. In the small, small communities, you all know those selling drugs and those families and youths that need help.

“I would like to also appeal that due to increasing cases of women suffering from domestic violence fuelled by drug abuse by their husbands and vice versa, that we embrace drug test for intending couples the same way they do HIV/AIDS and genotype tests eventhough there are no laws making that compulsory. This is why we say both husband and wife should also show drug free certificate before being joined and if any of them tests positive, he or she can be taken for treatment before the wedding is done to avoid unpleasant incidents that we see in recent times.

In his response, the Ona of Abaji said prior to Marwas assumption of office, drug menace in Nigeria has become a huge problem ravaging many of our young men and women including couples who were supposed to be enjoying their marital lives. Your coming on board as the head of NDLEA has brought some succour.

As a mark of honour and to further encourage the NDLEA boss, the monarch conferred on him the chieftaincy title of Santuraki of Abaji Kingdom. He promised to promote the drug integrity test advocacy of the Agency in addition to other ongoing drug supply reduction and drug demand reduction efforts.