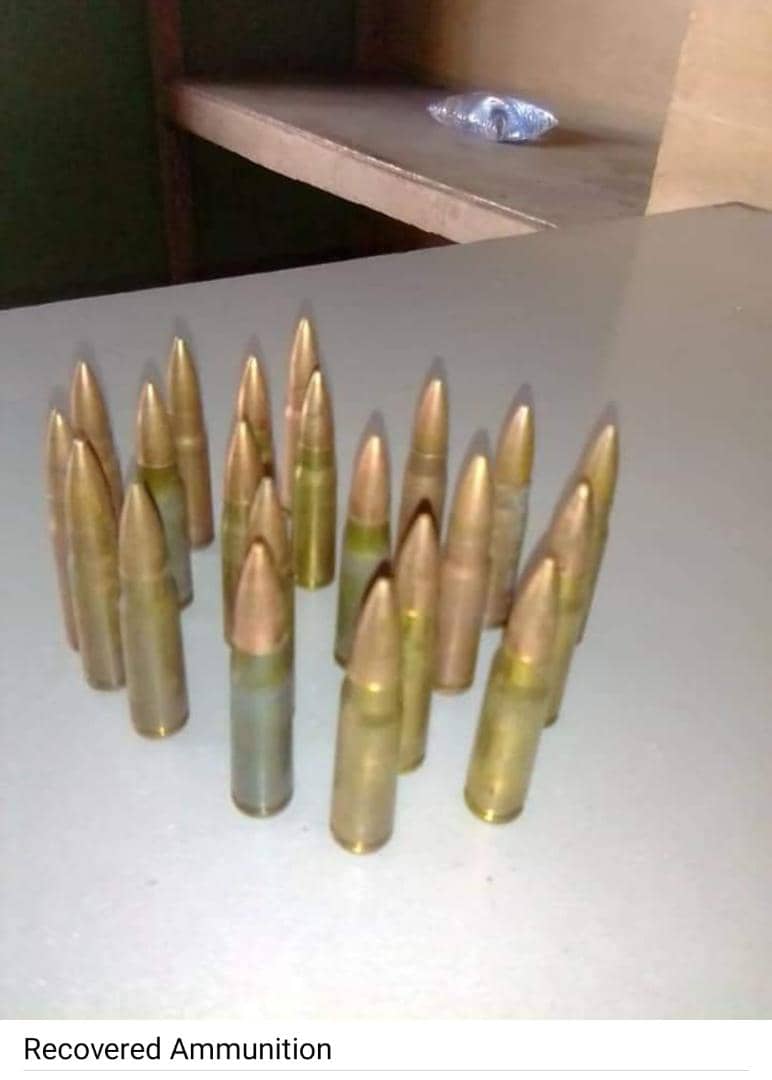 A suspected fake soldier, Hayatu Galadima and his accomplice, Hamisu Adamu have been arrested by operatives of the National Drug Law Enforcement Agency, NDLEA while conveying drugs, ammunition and communication equipment to bandits in Kaduna.

While Hayatu Galadima claimed to be a Lance Corporal serving in Ibadan, they added that they were taking the exhibits to Kaduna and Kano. Preliminary investigation however indicates that the suspects may have contact with bandits in the North West and were possibly moving the ammunition and the two-way radios to bandits who are presently excommunicated due to the suspension of telecommunications services in Zamfara, Sokoto and Kaduna states.

Chairman/Chief Executive of the NDLEA, Brig. Gen. Mohamed Buba Marwa (Retd) has directed the FCT Command of the Agency, which made the arrest to transfer the suspects to authorities of the Nigerian Army and another intelligence agency, which had earlier placed the two men on its watch list for further investigation.

In Rivers state, a final year student of Fine Arts and Design, University of Port Harcourt, Mario Okiwelu has been arrested for importing from the US five variants of liquid cannabis weighing 49.6grams. He was arrested through controlled delivery along with his accomplice, Precious Awuse on Monday 27th Sept, 2021 around NIPOST area, Port Harcourt.

In the same vein, narcotic officers attached to some courier firms in Lagos have seized different sizes of illicit drugs including 40grams of cocaine concealed in a University of Uyo degree certificate, going to Australia; 280 grams of cannabis hidden in body cream bottles going to Cyprus; 400grams of tramadol tucked in plastic bottles heading to Australia and 1kg of Methamphetamine concealed in auto parts with Hong Kong as destination.

Attempts by some traffickers to also import into Nigeria 20 cartons of khat weighing 126.900 kilograms through the NAHCO import shed of the Murtala Mohammed International Airport, MMIA, Lagos, were thwarted and the consignment seized. Similarly, on Wednesday 29th Sept, one Ibrahim Kale Sulyman was arrested during cargo search operations at SAHCO export shed and

sachets of tramadol weighing 76grams concealed inside black soap heading to Dubai, UAE, recovered from him.

In Kaduna, operatives arrested a widow, Aliya Idris on Saturday 25th September in the house of a wanted drug dealer, Shamsu Boda at Joji road, Tudun Wada Zaria. She was arrested during an operation at Shamsu Boda’s house. Found in her possession were 30 bottles of cough syrup with codeine and 20 sachets of rophynol with gross weight of 4.2kg and 77.5 grams respectively.

In raids across Lagos state on Wednesday, 29th Sept, at least two drug dealers were arrested and over 1,213.2kg drugs seized. At Ikosi, Ketu, Kosofe L.G.A,

In his reaction, Gen. Marwa commended officers and men of the FCT, Rivers, DOGI, MMIA, Kaduna and Lagos Commands of the Agency for an outstanding performance in their areas of responsibility in the past week. He charged them and their counterparts in other commands to remain vigilant and continue to exhibit the spirit and determination of the new NDLEA.