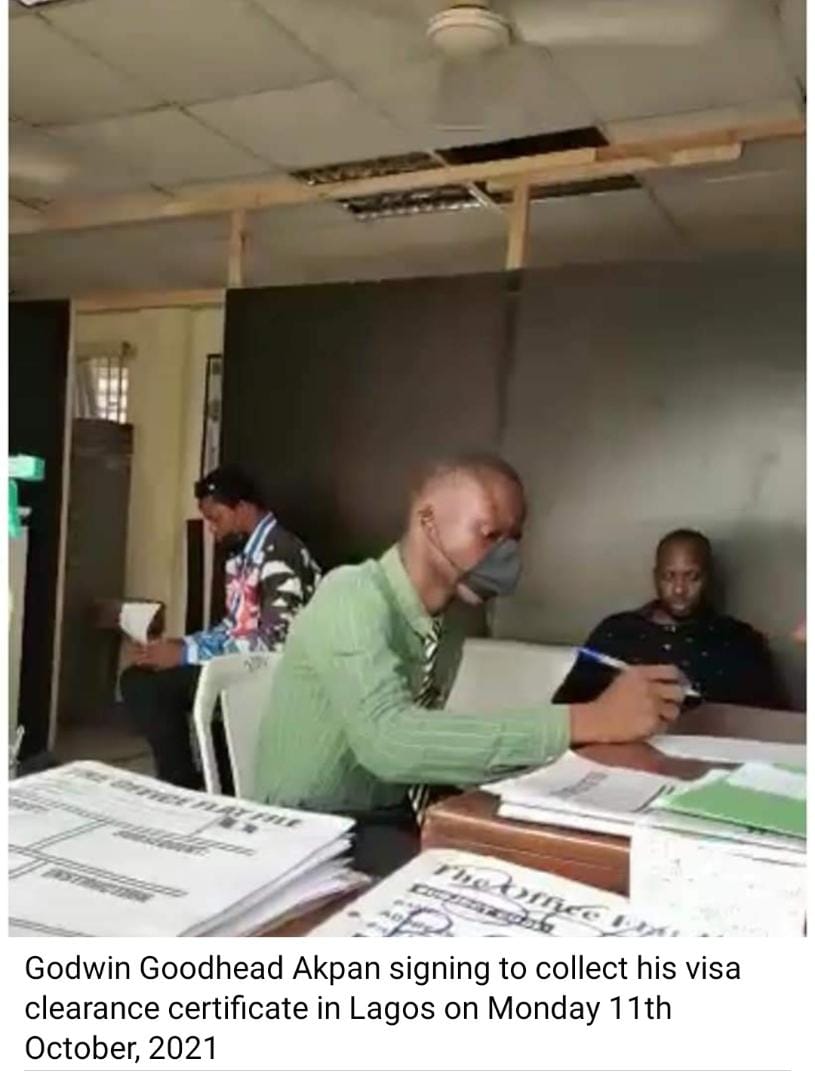 The National Drug Law Enforcement Agency (NDLEA), has dispelled misinformation and misconception about its handling of visa clearance applications following claims by a teenage applicant, Akpan Goodhead Godwin, in a video post that has gone viral on social media.

Though the applicant has eventually collected the clearance document on Monday 11th October, 2021 at the Lagos office of the Agency, five days after he was called that his papers were ready for collection, the NDLEA however wishes to correct some misconceptions created by the video done by Akpan.

A statement on Friday 9th October by the Commander, Akwa Ibom State Command of NDLEA, where Akpan obtained his application, Mrs Obot Bassey, denied claims that the Agency was hindering his trip to India to study law on scholarship, by not issuing him visa clearance.

According to the statement, “The Agency’s Visa Clearance system remains an important instrument and continues to serve as a strong deterrent for aspiring drug dealers from obtaining visas from countries that have subscribed to the scheme. These countries are source or gateway countries for illicit drugs. The visa programme, as a preventive measure draws voluntary participation from foreign missions in Nigeria with the consent of their home countries. The participating Missions make the NDLEA Visa Clearance Certificate an additional requirement for Nigerian visa applicants who wish to obtain entry visas from these countries.

“The issuance of a Clearance Certificate by the Agency, however, is not a guarantee and does not convey any assurance that visa will be issued to the applicant, but remains a valid additional requirement. The Agency usually collects personal information from the applicants, demands for two (2) credible sureties (guarantors) from the applicants and carries out background checks before clearance is issued. Countries that have willingly subscribed to the visa clearance scheme include Brazil, Indonesia, Malaysia, Pakistan, Russia, India, Singapore, Thailand amongst others.

“The policy is meant for persons travelling to the above mentioned “source countries” notorious for drug trafficking. The policy was not initiated by the Nigerian government but at the behest of the source countries. It is a counter measure at curbing transnational drug crimes.

“Facts about Akpan, Godwin Goodhead’s case: On the 1st of September, 2021, a minor male by name Akpan, Godwin Goodhead, came to the NDLEA Akwa Ibom State Command to collect visa clearance form and requirements. He returned to NDLEA, Akwa Ibom State Command on the 20th September 2021 to apply, along with relevant documents. Then it was discovered his documents were incomplete and he left NDLEA and returned with his completed documents on the 21st September.

“Investigations were concluded on the 23rd of September, 2021 and forwarded to the Visa Clearance Department, Lagos office, 4 Shaw Road, Ikoyi – Lagos for further investigation.

“It is pertinent to inform the public that the visa clearance proceedings in the National Drug Law Enforcement Agency (NDLEA) takes three (3) weeks to conclude. In the case of Akpan Godwin Goodhead, he obtained the form from the NDLEA, Akwa Ibom State Command on the 1st of September, 2021 and without completing the application, he set out for the Embassy in Abuja, was denied access, left for the Embassy in Lagos, was also denied access. While in Lagos, he was directed to NDLEA, Akwa Ibom State Command for visa clearance certificate.

“Information gathered from Akpan Godwin Goodhead indicates that he received his letter of admission on the 18th of August, 2021, came to NDLEA, Akwa Ibom State Command for the first time on the 1st of September 2021 to obtain Visa Clearance form. He submitted the last of his requirement on 21st of September, 2021 after which investigation and verification was commenced by the NDLEA, Akwa Ibom State Command.

“Counting down from the 21st of September 2021 to date, it adds up to only 2 weeks and two (2) days away from the stipulated 3 weeks. More so, information from the boy’s video indicates that he went to Abuja and Lagos respectively without the knowledge of NDLEA, Akwa Ibom State Command.

“While Akpan Godwin Goodhead was busy misinforming the public on Facebook, his file was being processed at the visa clearance department, Lagos and currently on transit to Akwa Ibom State Command.

“The NDLEA is a Federal Government Agency mandated to rid the country of illicit drugs and its attendant consequences. The Agency is committed to its core mandate and will never deviate from its constitutional assignment.

It is a thing of joy to the Agency in particular and the nation at large when her youths pursue the right paths like this young man and not dabble into drug activities. NDLEA will never frustrate the future of any youth but instead will always try to salvage it when they go astray.”