Over 22,160 kilograms of Codeine syrup, Methamphetamine and Skunk have been seized at Apapa seaport and a notorious drug den, Akala, Mushin, Lagos in two major operations in the state by operatives of the National Drug Law Enforcement Agency, NDLEA.

While a total of 14,080kg codeine syrup (8,080 litres) and 4,352.43kg cold caps used to conceal the former in a 40ft container imported from India, were intercepted on Wednesday 2nd February, 2022 at the Apapa port, Cannabis/Loud/Skunk imported from Ghana and Methamphetamine weighing 3,727.72kg were seized in an early morning raid at Akala, Mushin where 17 suspects including five females were arrested on Thursday 3rd Feb. The seizure at the Lagos seaport followed intelligence from foreign partners and cooperation of other port stakeholders.

At Akala, NDLEA Strike Force operatives in their numbers with support from the military stormed fortified warehouses in the drug den and evacuated bags and bottles of cannabis, loud, skunk, skuchies and methamphetamine as well as the 17 suspects for further investigation.

Meanwhile, a female drug kingpin, Mrs. Jemilat Seriki, who is one of the owners of 12,385 pellets of Loud imported from Ghana and intercepted at Eko Atlantic beach, Victoria Island Lagos on Saturday 27th November 2021, has been arrested by narcotic officers after weeks of manhunt. Mrs. Seriki, a.k.a Iya Ilorin admitted being one the owners of the consignments seized, adding that her bags of drugs had Jah Bless written on them.  When eventually identified and sorted, she has 16 bags with the inscription containing drugs weighing 668.85kg.

In Niger state, a 64-year-old former Divisional Police Officer of Idanre Police station, Ondo state, who was dismissed from service for drug offences, Mr. Monday George Chika, has again been arrested with an accomplice, Emmanuel Eniola, 40, with 280 blocks of compressed cannabis weighing 168kg. They were arrested on Sunday 30th Jan. in Mokwa, Niger state, after their Toyota Avalon car marked EKY 429 BZ (Lagos) loaded with the substance at Idanre and heading to Kanji, Borgu area of the state was intercepted.

At the Murtala Muhammed International Airport, MMIA, Ikeja Lagos, attempts by some traffickers to export different quantities of Methamphetamine to Brazil and United Kingdom were scuttled by narcotic officers at the airport. The first bid was made on Friday 28th Jan. through the SAHCO export shed where operatives intercepted 0.80kg of Meth concealed in relaxer plastic container heading to the UK. A suspect, Akuta Chioma Lucy who presented the consignment for search had been arrested for further investigation.

The second attempt was on Friday 4th February during the outward clearance of passengers at Gate 'C' Departure hall of the airport when an intending male passenger on Ethiopian Airline going to Brazil, Onyeaghala Chidi was intercepted with 500grams of Meth concealed inside three plastic hair relaxer containers. Also at the airport, a male passenger, Iliyasu Yushau Yushau, coming from Kampala, Uganda via Nairobi, Kenya was intercepted by operatives with 268 debit cards belonging to Access Bank, GTBank and Zenith Bank, during the inward clearance of passengers on the flight on Sunday 30th Jan.

While operatives in Delta state arrested a 21-year-old student of Federal Polytechnic, Auchi, Kate Osagie over a 17.6grams designer drug she ordered from Onitsha, Anambra state, their colleagues in Borno state on Thursday 3rd Feb nabbed one Fatima Musa, 30, for attempting to smuggle pentazocine injections into the camp of surrendered insurgents.

In Plateau state, operatives intercepted a truck marked LSD857XB coming from Ekpoma, Edo State with 885 blocks of cannabis sativa that weighed 736kg. A N400,000 paid to bribe the arresting officers has also been warehoused as part of exhibits for prosecution, just as two suspects; Ebunoluwa Babalola, 40, and Sulyman Sheu, 30, were arrested at Ganmo, Ilorin, Kwara State with 90kg of Cannabis.

In the same vein, 2kg of Methamphetamine being brought to Abuja by a 29-year-old Charity Omuche from Anambra state was intercepted on Friday 4th Feb by operatives at Gwagwalada area of the FCT, while officers of the Kaduna Command of the Agency also arrested a suspect, Buhari Isah Umar with 300 shisha pens and 999 portions of synthetic cannabinoids with gross weight of 9.690kg.

Chairman/Chief Executive of NDLEA, Brig. Gen. Mohamed Buba Marwa (Retd) has commended officers and men of the Strike Force, Apapa seaport, MMIA, Lagos, Niger, Edo, Borno, Plateau, Kwara, FCT and Delta Commands of the Agency for the successful interdiction operations that led to the seizure of thousands of kilograms of illicit drugs from across the country in the past week. He charged them and their compatriots in other commands not to rest on their oars. 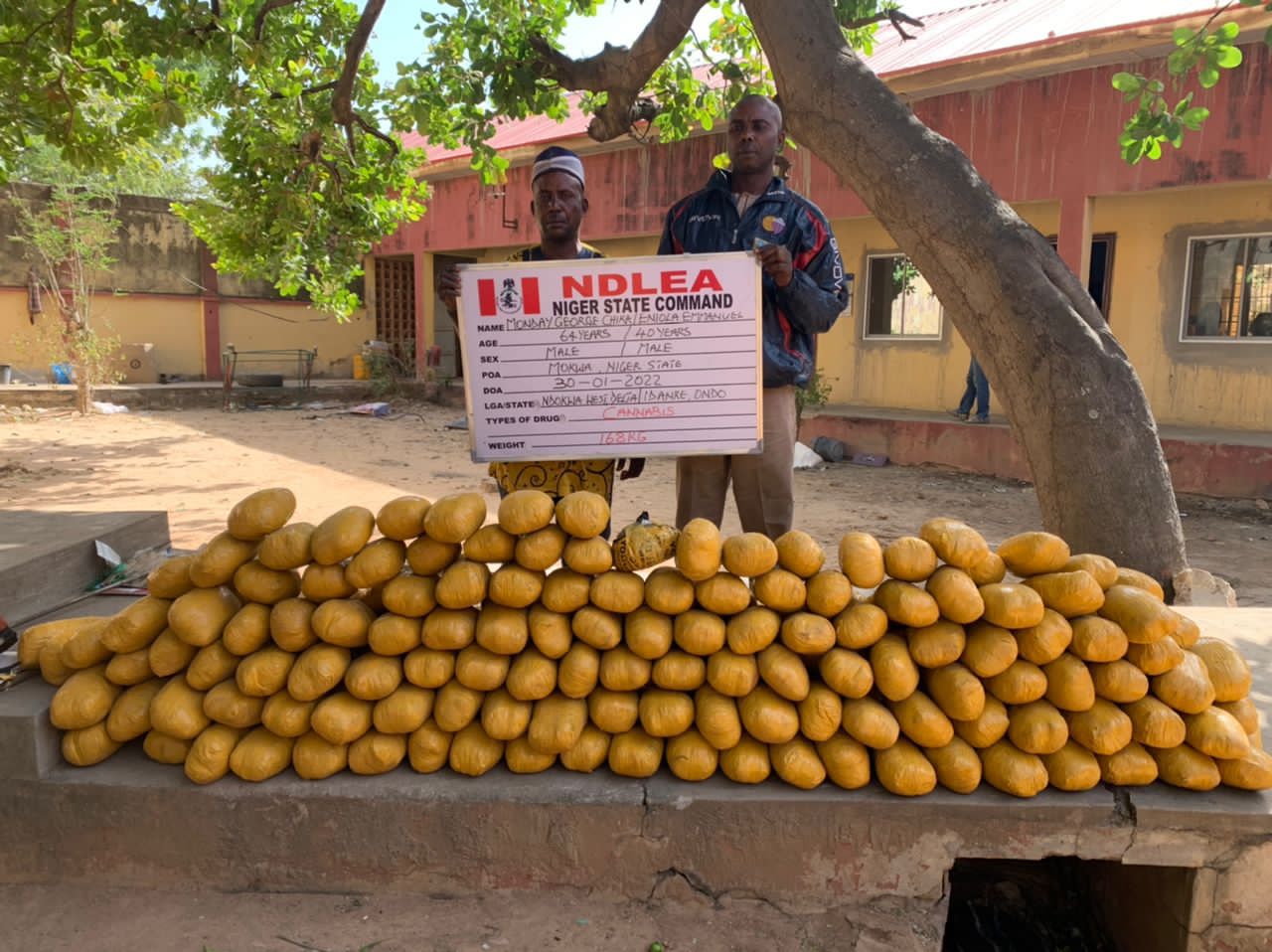 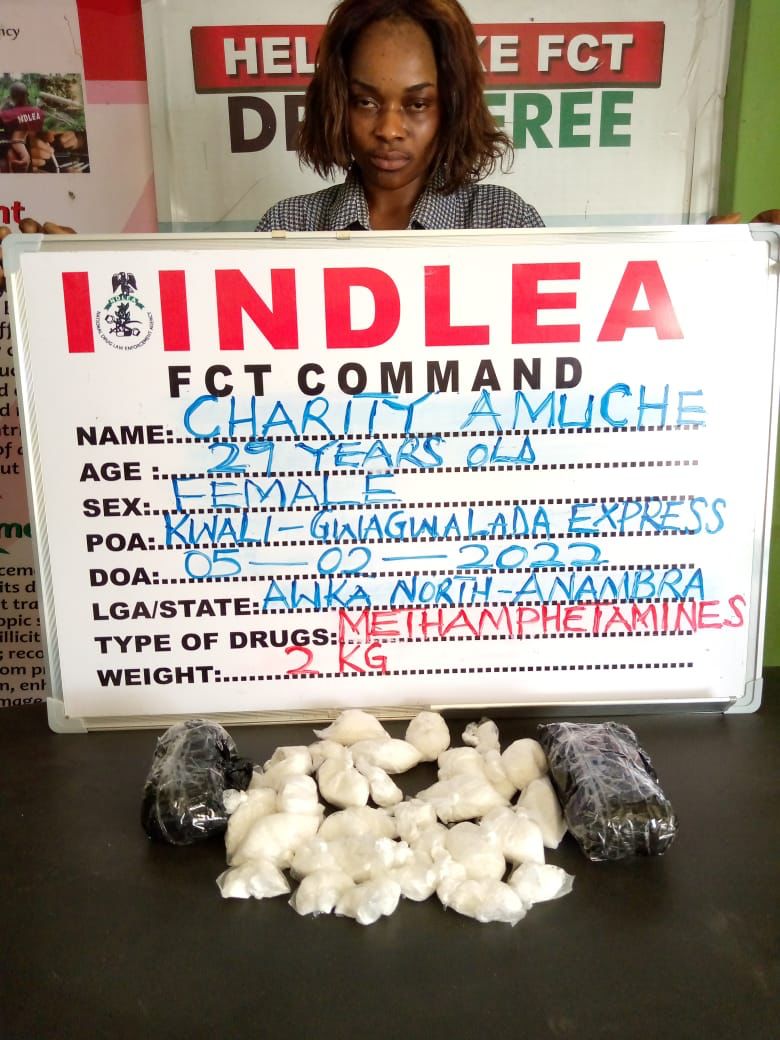 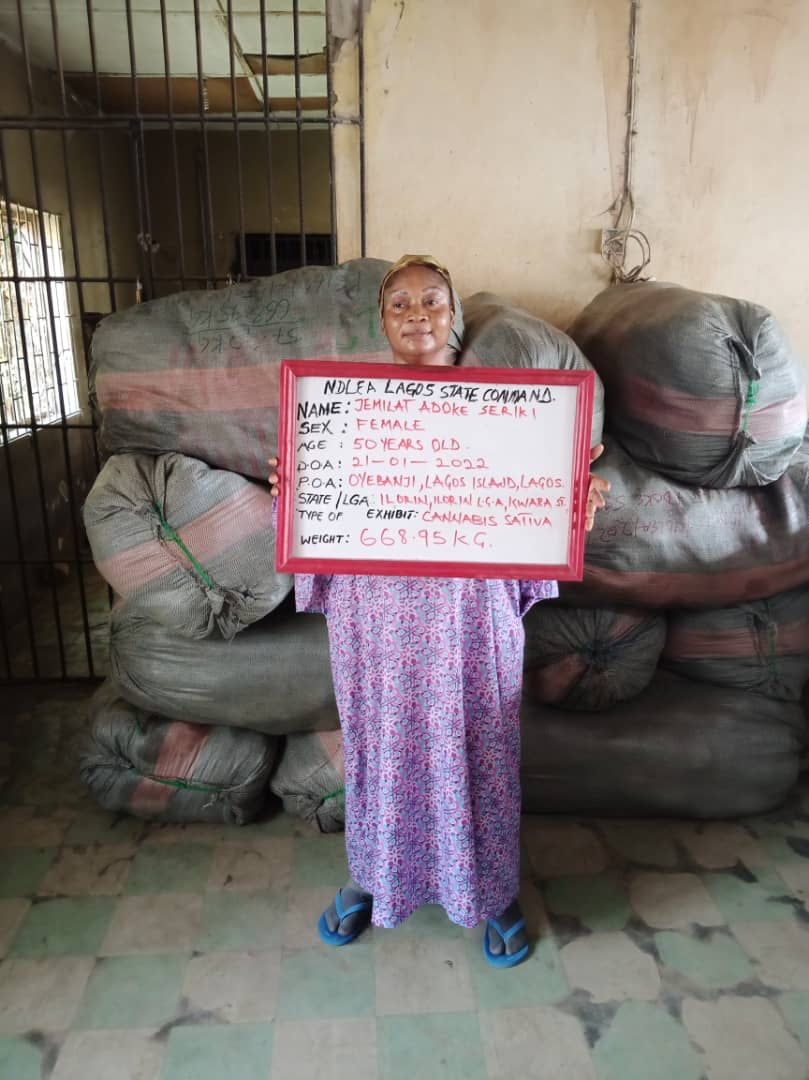 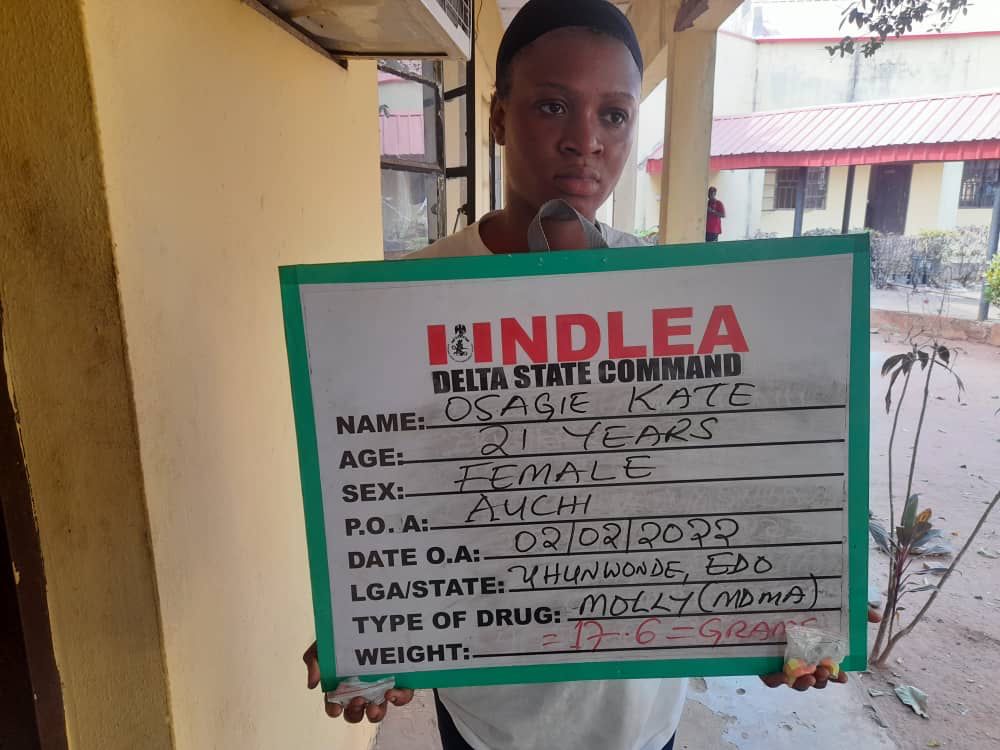