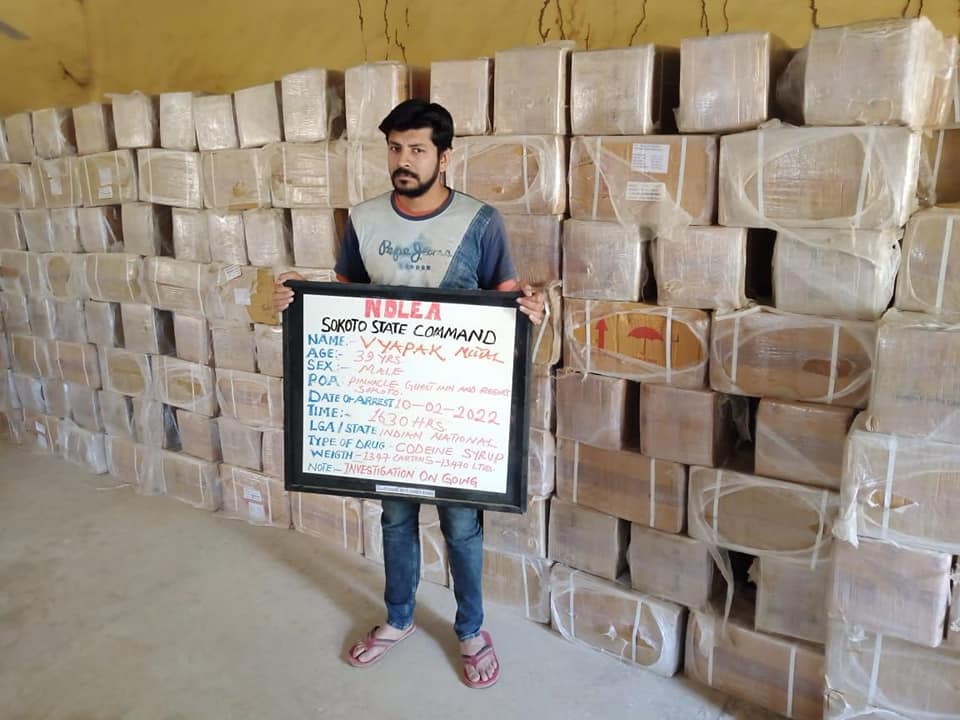 An Indian businessman, Vyapak Nutal has been taken into custody for interrogation by operatives of the National Drug Law Enforcement Agency, NDLEA, over the smuggling of 134,700 bottles of Codeine syrup into the country through the land border between Nigeria and Niger Republic in Sokoto state.

The suspect had loaded the consignment into trucks in Cotonou, Benin Republic and drove through the land borders via Niger Republic before entering Sokoto state at the Illela border. Settled in a hotel in Sokoto state, credible intelligence reveals that Nutal began to look for buyers for the controlled drug. While operatives were on his trail, officers of the Department of State Security were able to apprehend him and swiftly handed him over to NDLEA on Wednesday 10th February 2022.

In a related development, attempts by drug traffickers to export large quantities of Heroin, Methamphetamine, Khat, Tramadol and Cannabis through the Murtala Muhammed International Airport, MMIA as well as three courier companies in Lagos have been frustrated by narcotic officers who intercepted the illicit consignments.

At the Lagos airport, operatives on Tuesday 8th Feb arrested one Felix Rotimi Eshemokhai with 1.75kg heroin while trying to board Royal Air Maroc to Casablanca, Morocco while another trafficker, Okafor Emmanuel Onuzuruike was also nabbed same day during his bid to travel on RwandAir to Dubai with 2.2kg of Cannabis concealed in food stuff.

Not less than 25 kilograms of Methamphetamine, Tramadol, Cannabis and Khat concealed in motor parts, MP3 player, speaker and fabrics heading to USA, UK, Australia, Dubai and Madagascar were seized at three major courier companies in Lagos.

In Gombe state, 31,000 capsules of Tramadol were recovered from a truck that left Onitsha, Anambra state for Mubi, Adamawa state and the owner, Ibrahim Tukur Bage, arrested on Friday 11th Feb, while attempting to escape. This followed the arrest of Aliu Salami, 43, with 143.9kg cannabis at Oke-Ata, Abeokuta South LGA, Ogun state on Wednesday 9th Feb.

In the same vein, not even a bunch of talisman (charms) used by a trans-border drug dealer, Shu'aibu Salisu could save him and his gang as their consignment of 578kg of Cannabis meant for Niger Republic was intercepted in Kwara state on 8th Feb when two persons: Gambo Lawal and Ibrahim Mohammed were arrested while conveying the drug to someone in Charanchi, Katsina State. A follow up operation led to the arrest of Salisu and two others; Sani Musa and Auwal Amina the day after at different locations within Kaita LGA, Katsina.

In Benue state, a fake security agent, Mr. Dennis Emadiong was on Saturday 12th Feb arrested at NDLEA check point, Alaide, Benue with 239grams of cannabis and 10 rounds of 7.62mm live ammunition while on his way from Akwa Ibom to Maiduguri, Borno state. Another suspect, Stephen Folorunsho was also nabbed during a routine Stop and Search operation, along Apir-Makurdi road with 147 compressed blocks of cannabis weighing 130kg stuffed inside bales of used clothes popularly called Okrika on his way to Gombe State.

In Adamawa state, no fewer than 22,700 tablets of Tramadol and Exol-5 were seized in Numan area of the state from two drug dealers: Mmaduabuchibeya Kingsley and Onyeke Kenneth in separate raids on Thursday 10th February.

While commending the officers and men of Sokoto, Gombe, Ogun, Kwara, Adamawa, Benue, MMIA Commands as well as those of the Directorate of Operation and General Investigation, DOGI, for their resilience in the various drug supply reduction efforts, he charged them and their compatriots across other commands to remain on the offensive against the cartels while he hailed the synergy and support from other security agencies. 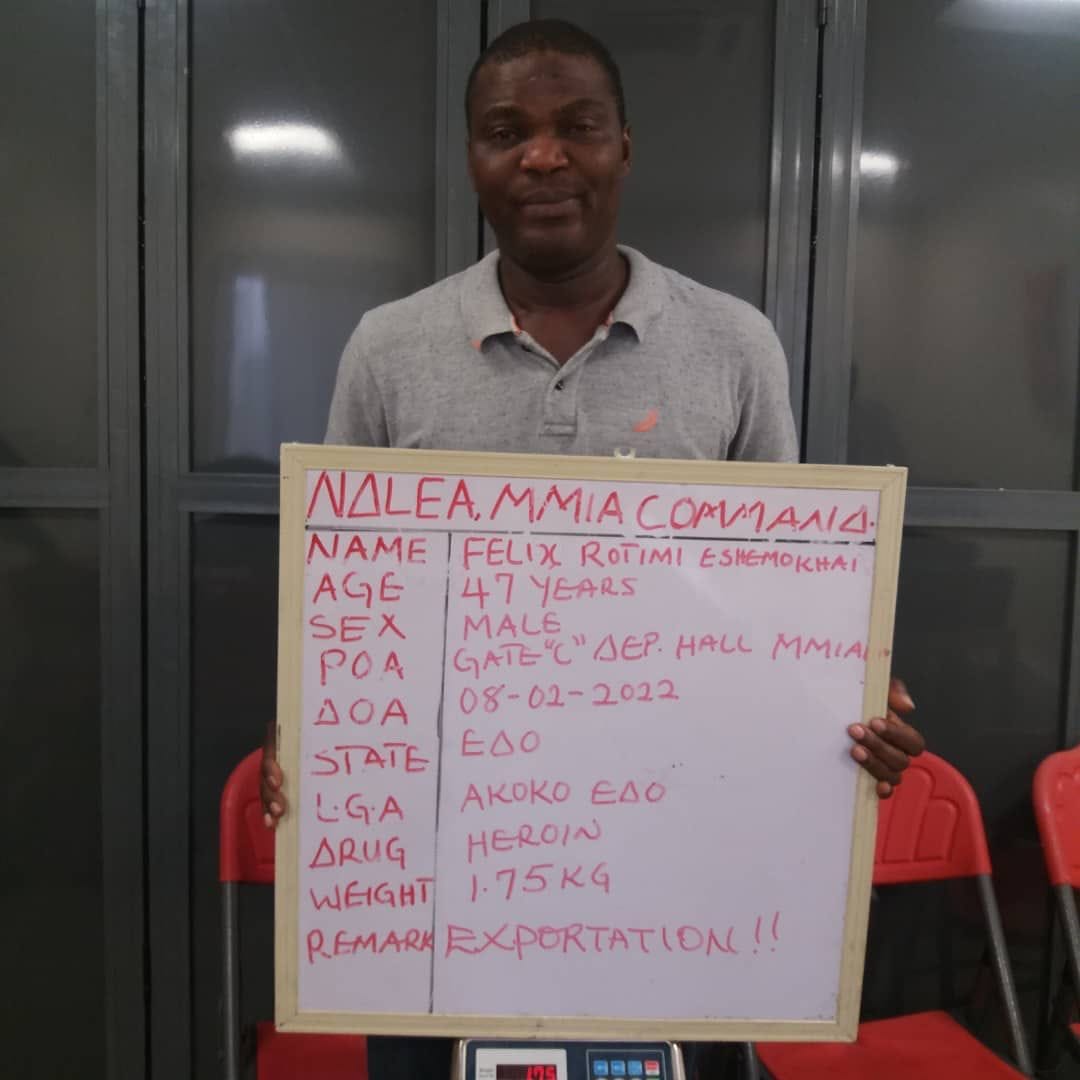 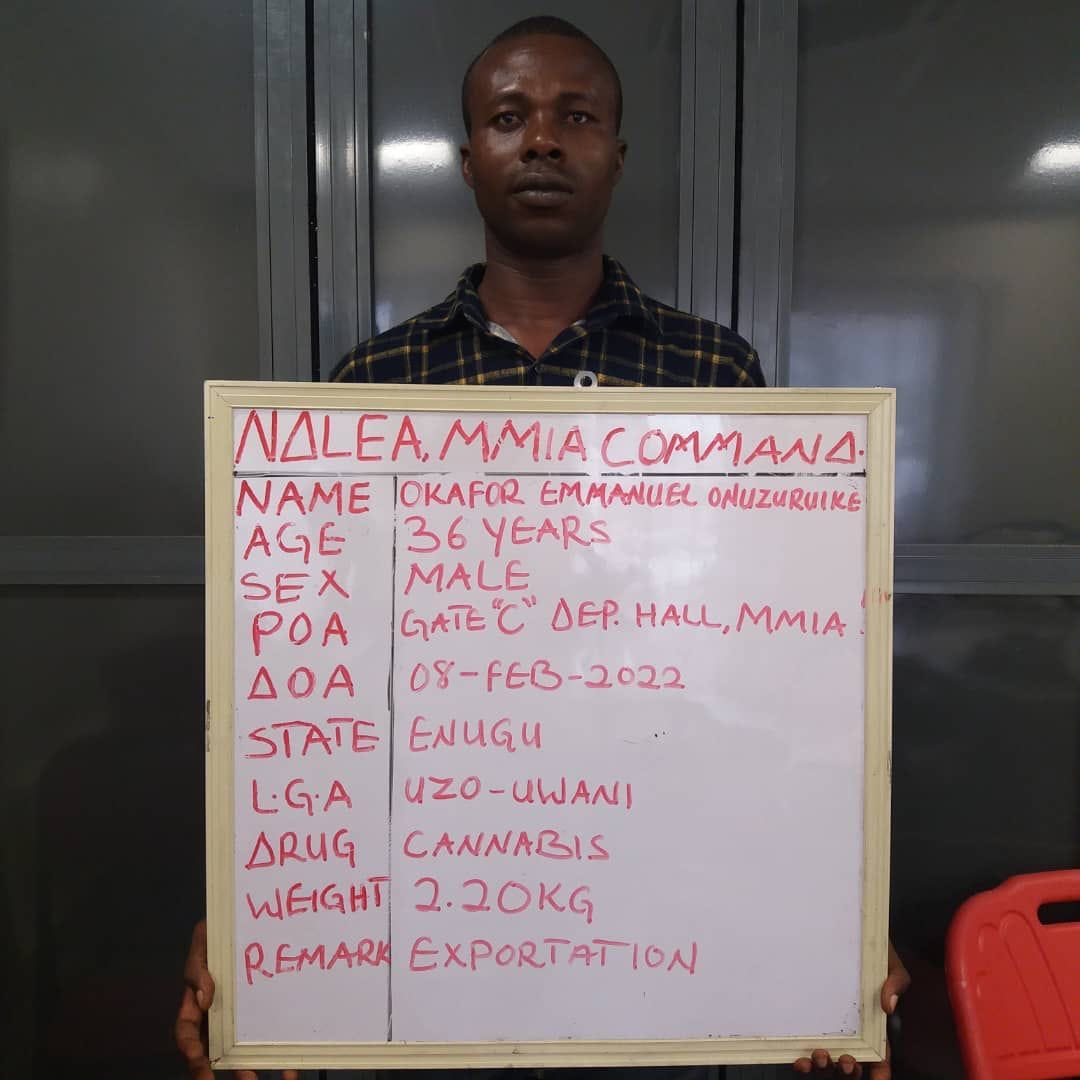