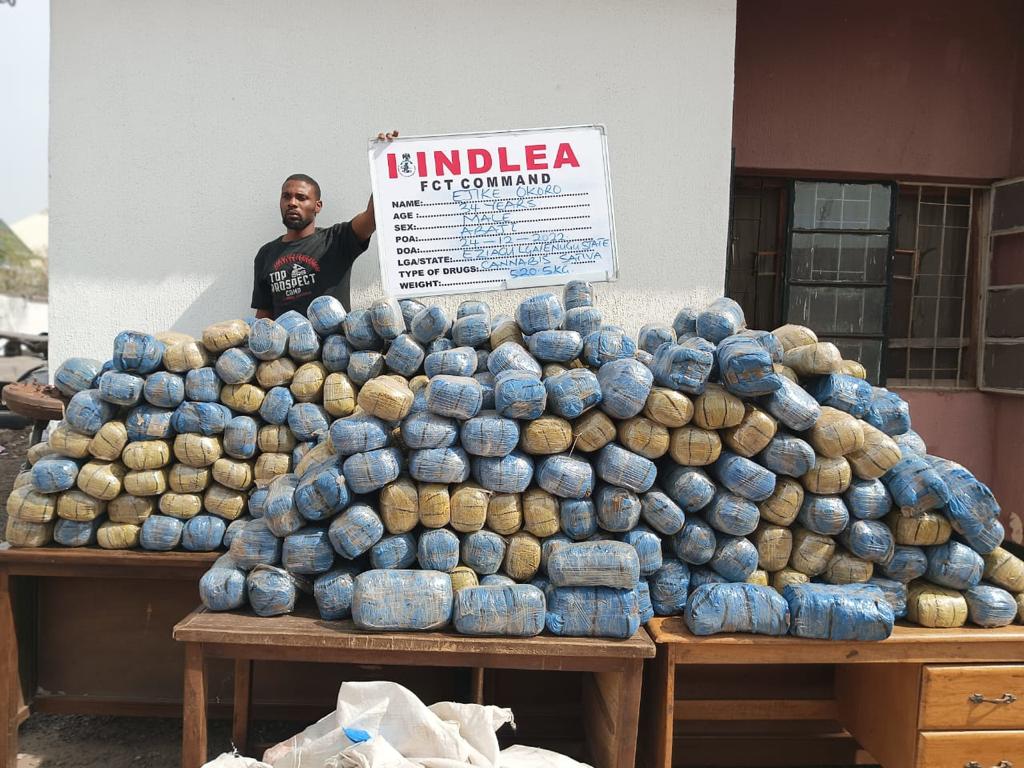 Consignments of Colorado concealed in vehicles imported from Montreal, Canada and packs of cannabis juice flown in from South Africa, meant for distribution ahead of the Christmas festive season, have been intercepted by operatives of the National Drug Law Enforcement Agency, NDLEA, at the Tincan seaport, Apapa and the Murtala Muhammed International Airport, MMIA, Ikeja, both in Lagos state.

At least, 12 suspects including two dock workers and a wine shop businessman have so far been arrested in connection with the two seizures as well as the recovery of 152 kilograms of skunk from two dealers in Kano; 100,000 pills of Tramadol in Imo state and 520kgs of cannabis hidden in soft drinks crates loaded in a truck coming to Abuja, the nations Federal Capital Territory.

At the SAHCO import shed of the Lagos airport, the search of a consolidated cargo from South Africa led to the discovery of smuggled bottled Cannabis juice with a gross weight of 16.50kgs on Wednesday 21st December. Investigations by anti-narcotics officers subsequently led to the arrest of four freight agents: Soremekun Olalekan Wasiu; Olufisayo Dayo; Moruf Olusegun Bashir and Imole Moses Ajayi, whose statements eventually led to the arrest of the consignee, a wine shop business owner, Emebede Chuka, the following day Thursday 22nd Dec.

Also, an attempt to export quantities of cannabis and ecstasy pills also known as MDMA concealed in beverage drink, Bournvita, containers to Dubai, UAE, through the NAHCO export shed on Friday 23rd Dec was frustrated while a vulcaniser given the assignment for a fee of N4,000, Iyanda Ogunleye Yaya has been arrested.

In the same vein, a consignment of 185 parcels of cannabis Indica, popularly called Colorado weighing 61.3kgs have been seized during a joint examination of a container at the Tincan seaport, Lagos. The container marked MSCU5206726 from Montreal, Canada was declared as containing three units of used vehicles but upon a 100% examination, it was found to contain two vehicles; a 2009 Toyota Corolla car and a 2009 Ford Econoline bus as well as used car engines, bicycles, shoes and other items including the drugs. Two dock workers: Abdulquadri Abdulazeez and Ogbuji Kenneth are already in NDLEA custody in connection with the seizure following their initial arrest by the Port Security and the Police.

In Kano, two suspects: Nura Zakariya'u and Alkasim Abubakar were arrested along Zaria-Kano road, Kwanar Dangora, with 161 blocks of cannabis weighing 152kgs and various quantities of Exol and Codeine based syrup, while a total of 100,000 pills of tramadol were recovered from a suspect, Amaechi Johnson in Imo state on his way to Onitsha, Anambra state. Similarly, a total of 708 kilograms of cannabis were recovered by operatives from a bus at Ehinogbe, Owo area of Ondo state on Tuesday 20th December.

In his reaction to the arrests and seizures, Chairman/Chief Executive Officer of NDLEA, Brig. Gen. Mohamed Buba Marwa (Retd) CON, OFR commended the officers and men of the MMIA, Tincan, Kano, Ondo, Imo and FCT commands for their vigilance, professionalism and robust working relationship with other security agencies in their areas of responsibility, urging them and their compatriots across the country to ensure no gram of illicit substance escapes their checks into the streets during the festive season and beyond. He wished them and their families a Merry Christmas celebration and a prosperous new year in advance. 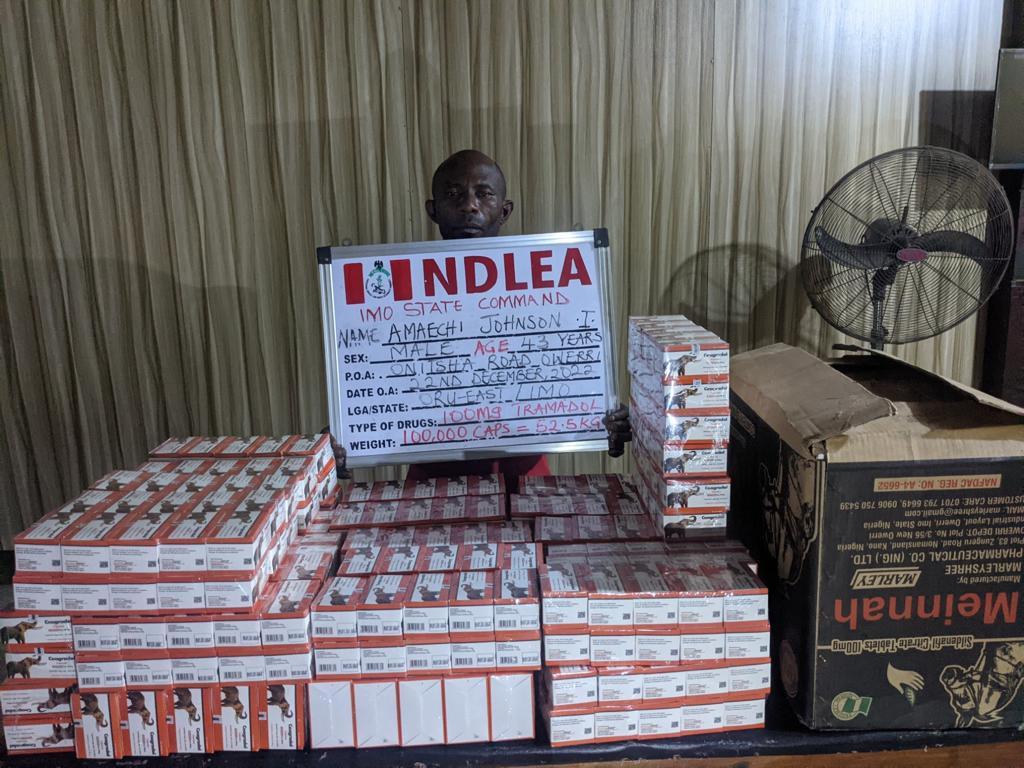 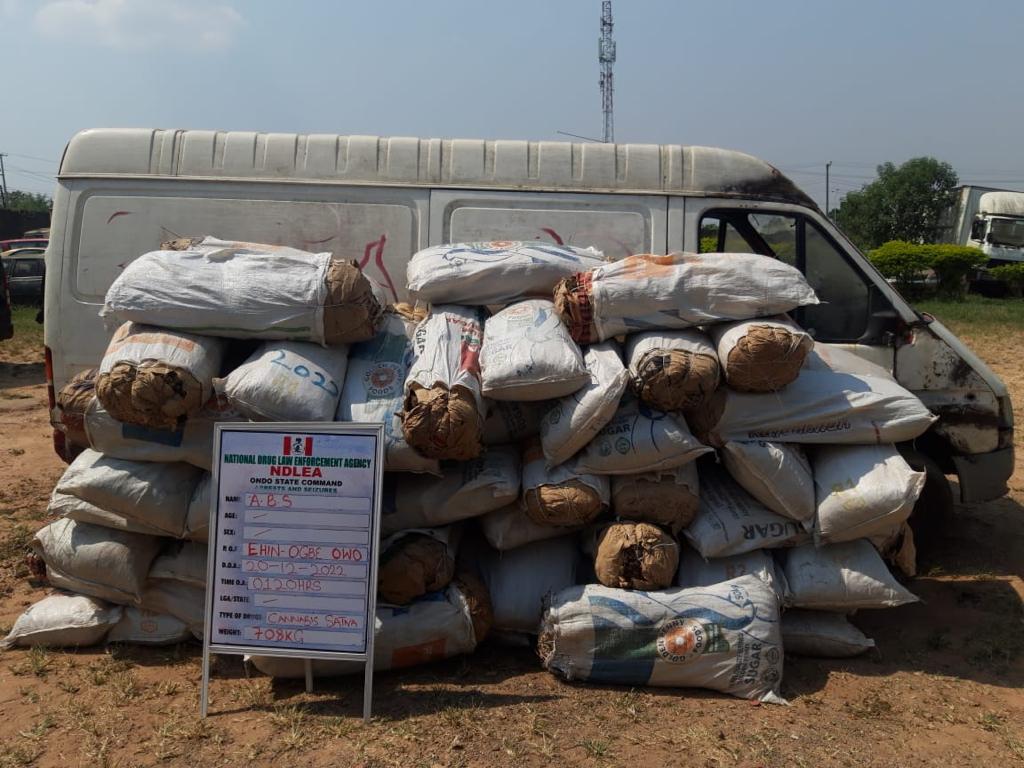 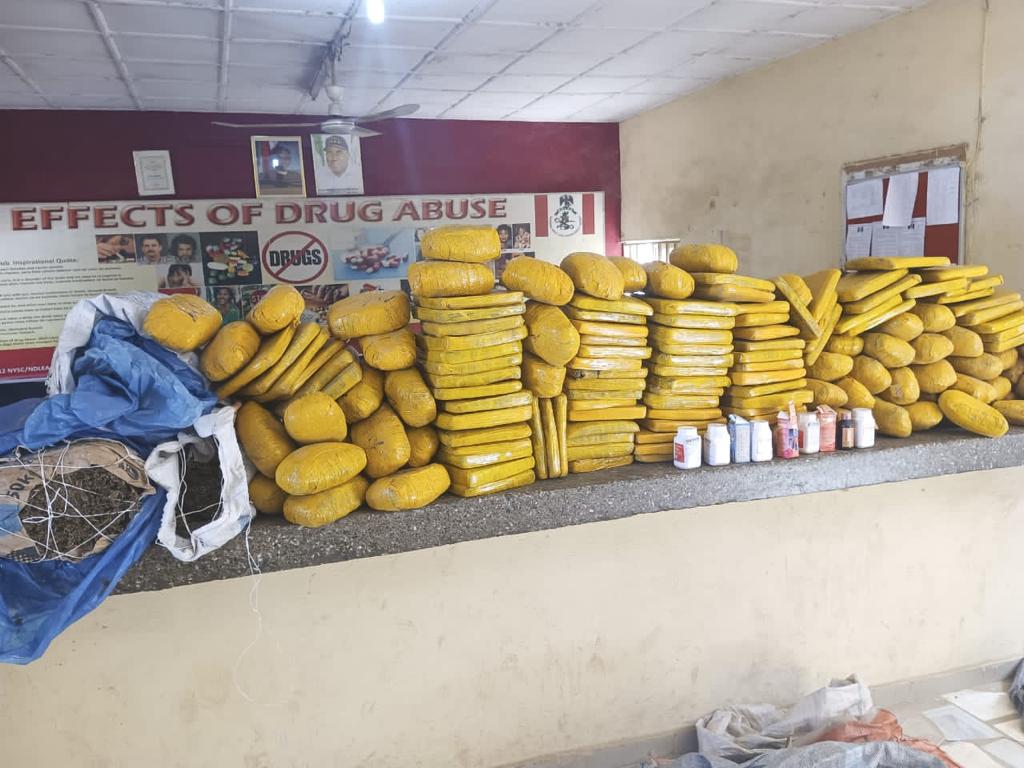 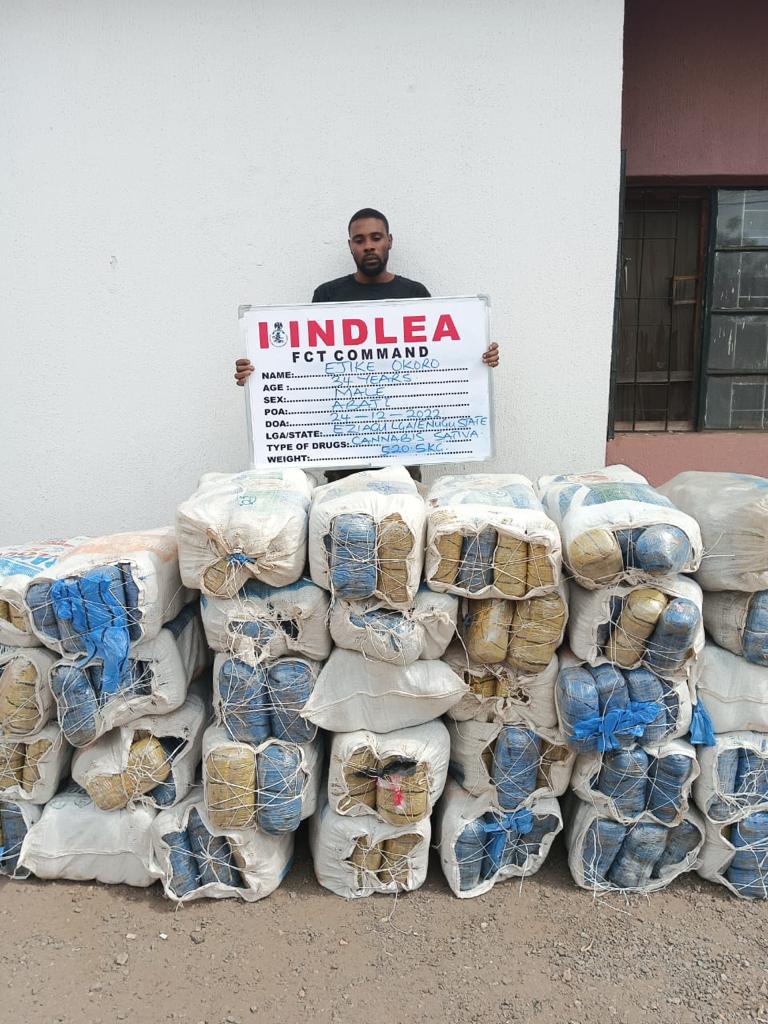