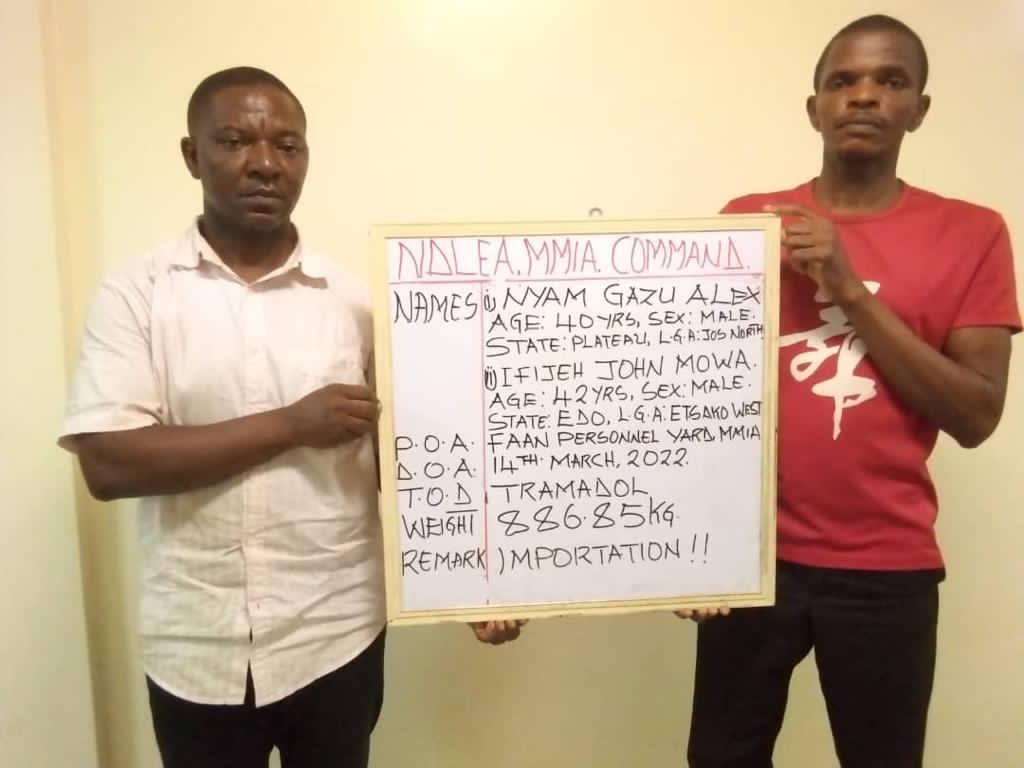 Operatives of the National Drug Enforcement Agency, NDLEA, have seized over 1.9 million tablets of Tramadol and Codeine imported into the country from Pakistan and United Kingdom through the Murtala Muhammed International Airport, MMIA, Ikeja Lagos.

Of the total seizures, 40 cartons of Co-Codamol, a brand of paracetamol with Codeine, which is classified as Opioid, were seized from a freight agent, Eraikhueme Ehis. The seizure made on Thursday March 10 translates to 349, 800 tablets weighing 336kg. The consignment came from London, UK as a consolidated cargo through the SAHCO Import Shed of the airport. The consolidated cargo was declared as personal effects but was discovered to contain some medicaments.

In the same vein, no less than 1, 584,000 tablets of Tramadol were recovered on Tuesday 15th March by NDLEA operatives in collaboration with Aviation Security (AVSEC) and Customs service personnel at the airport. The seizure includes 17 cartons of 250mg Tramadol branded as "Tamra" weighing 669.70kg and five cartons of 225mg Tramadol under the brand name "Royal" with a gross weight of 217.15kg.

The psychotropic substance, which was imported into the country from Pakistan was smuggled through the airport tarmac using one of the vehicles of the Skyway Aviation Handling Company (SAHCO) and was intercepted at the Federal Airports Authority of Nigeria (FAAN) Personnel Yard. Two suspects: Ofijeh John Mova, a SAHCO driver and Nyam Gazu Alex who is a security guard with the Nigerian Aviation Handling Company (NAHCO) have so far been arrested in connection with the seizure.

The previous day, Monday 14th March, a total of 2,160 tablets of Co-codamol weighing 1.95kg and 240 tablets of Tramadol were also intercepted in a consolidated cargo from the UK at the SAHCO import shed of the airport. Follow up operations led to the arrest of the importer of the consignment, Omonijo Temidayo the following day Tuesday 15th March.

Similarly, follow up operations have also led to the arrest of Hajiya Mariam Saliu in Edo state on Monday 14th March after investigations uncovered her as the brain behind attempt to export 1.55kg cannabis to Dubai through the Lagos airport on 5th March.

Meanwhile, NDLEA operatives have arrested one of the kingpins behind the attempt to smuggle 11.93 kilograms of Cocaine to Accra, Ghana through the Seme land border, Lagos. The 50-year-old suspect, Oyewunmi Ademola Ahmed was arrested on Tuesday 15th March at Mile 2 area of Lagos after series of follow up operation following the arrest of a driver, Osagie Anthony with the 11.913kg cocaine at Gbaji, Seme-Badagry expressway on January 23.

In Kwara, a drug dealer, Hope John, 30, was arrested on Saturday 19th March at Goodness area of Offa with different quantities of cannabis, methamphetamine, designer drug and cocaine.

Chairman/Chief Executive of NDLEA, Brig. Gen. Mohamed Buba Marwa (Retd) has commended the officers and men of the MMIA, Kwara and Seme Border Commands of the Agency for their commitment, dedication to duty and maintaining cordial working relationship with other stakeholders in their areas of responsibility. 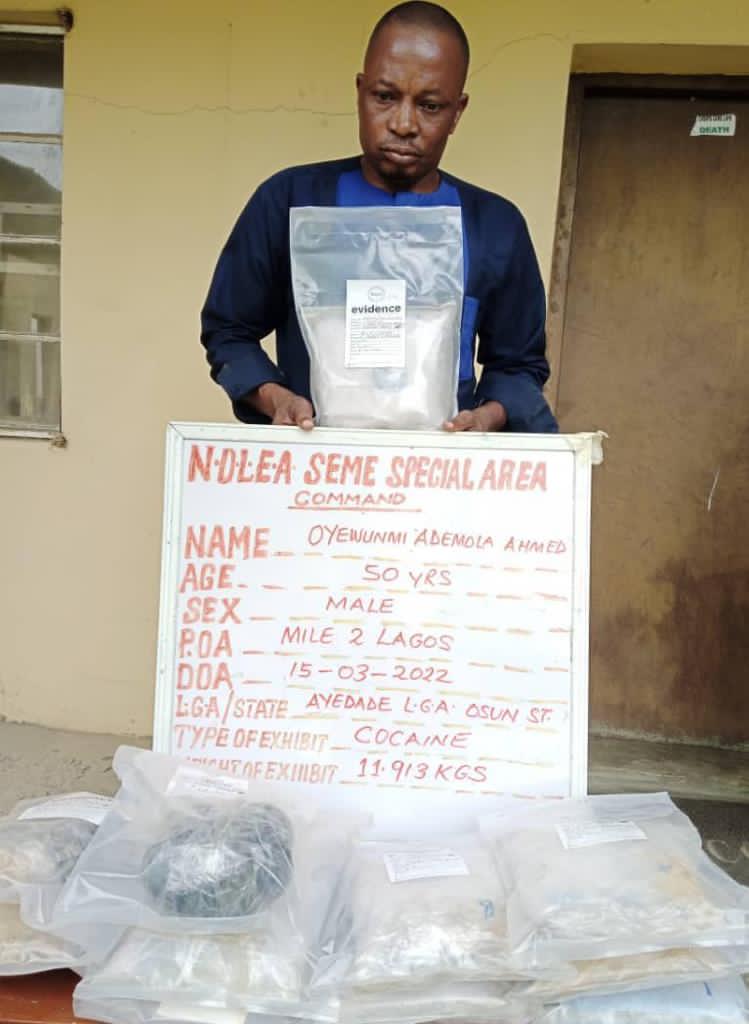 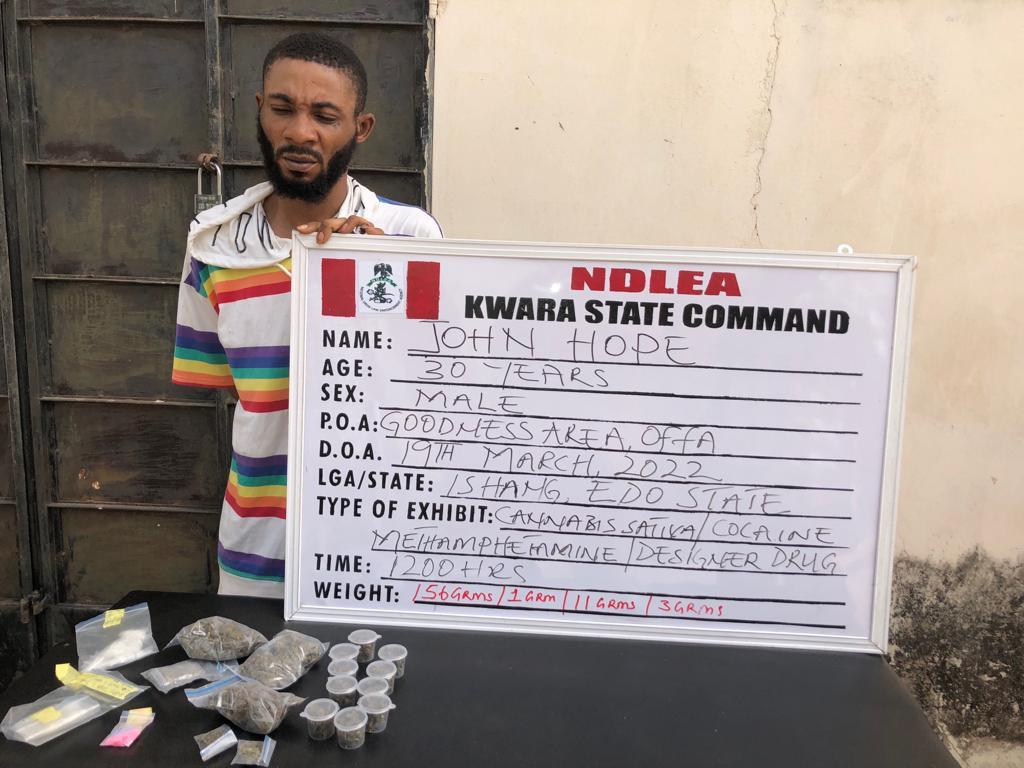